So I'm a fan of Dark Sun. It's not a secret at this point. So when Wizards announced that they were doing a new version of the setting for fourth edition D&D, I immediately started plotting an elaborate scheme to insure my involvement, no matter the cost. And after months of shady back alley dealings, greased palms, and dark deeds I shall never speak of, the art director finally offered me some images for the campaign book. Not because of my efforts mind you, he just thought I could do some cool art for the book.
This is one of the images produce for that project, one of the classic creatures of the world, the Thri-Kreen, done in a high action pose with minimal background. 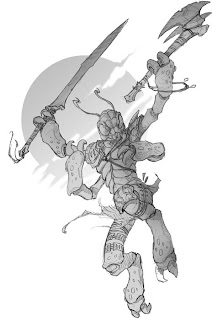 I started with the basic pencils, which were approved without changes. I did end up changing the arm position slightly to improve the silhouette, but other then that, it was pretty straight foreword from start to finish. 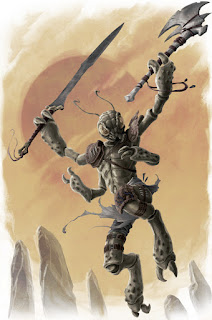 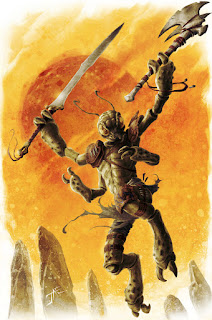 And when it was done, I realized I was pretty happy with the result, but what I really wanted to do, was create the kind of full page art that the original Brom works are so famous for, with lots of rugged, rocky background that gives the viewer a peak into the wider world. 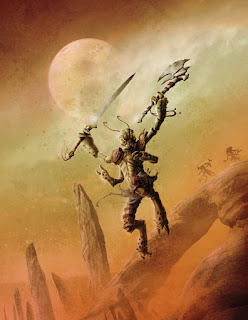 So, I decided that I would take some spare time and take this small image, and make it into somthing bigger as a personal project, and a few months later, I re-built a larger background behind him, using some of the old Brom works as color reference to try to strike that same visual cord. 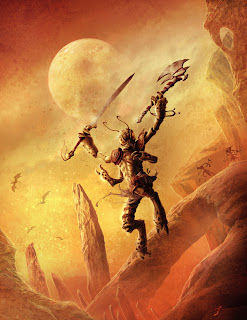 In the first image, I had set down the basic colors, textures, and environment pieces, but it still needed some punch. So I created more layered rock formations, increasing the depth of field, and framing the image to make it feel closed in, and a better spot for a Thri-Kreen ambush. I also punched up the contrast and color, to give it a more saturated, reddish, sun blasted look.
Posted by Unknown at 1:42 PM