Here we have one of my random magic card illustrations from throughout the past year.
Usually, when doing magic cards, the art director commissions them 2 or 3 at a time, and for a specific block or set, complete with style guide/world bible and tons the theatrical flourishes around the art order for inspiration. They even send the commission by singing telegram.
OK, only some of that is true. Obviously the telegram thing is completely accurate. But the point here is that occasionally, I just get a card here, or a card there, and they are not connected to anything else, either as a special autonomous release, a promotional image, or something else entirely (they don't always say, so sometimes its a great big mystery).
This however, was done completely by itself, but they did say which set it was for, namely, the 2014 core set. 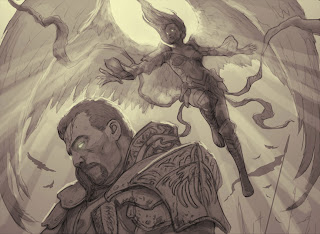 The art director made only one change to the sketch, by asking for the character to look a lot happier about the experience. In retrospect, he does look like someone ran over his dog in the sketch, even though hes getting hit by super bright light rays blasting from behind the wings of an angel dropping out of the sky behind him, reaching for him from above as if to say "Give me your wallet". 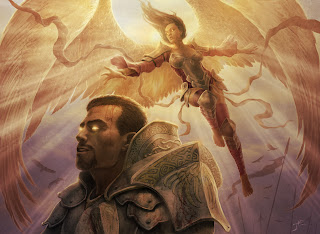