This guy is fond of books, and scrolls. He is literally wearing scrolls all over his clothing, like arcane armor. I'm not sure how he sleeps without wrinkling some of these texts irreparably, or maybe he takes them off first? In that case, it must take him longer to get dressed then a "D" list celebrity going to the Oscars.
Maybe the sad side effect of being a dwarf who loves books, is attention deficit disorder? Maybe the scrolls are simply notes to remind himself about the things he uncovered in his reading.
As a side note about the art, I want to also mention that I really love drawing dwarves. This may sound strange, so let me try to explain. When growing up, I played a fair amount of fantasy video games, dungeons and dragons, and watched every fantasy movie I was allowed to watch (fantasy movies in the eighties were sometimes as full of nudity as they were swords). Anyway, this gave me an appreciation for good design, both in monsters, and in the more human looking races. I always preferred believability more then anything, and because of this I always felt dwarves were commonly done a disservice in the genre. A people of stout proportions and hearty appetites, they were often portrayed as a cross between the fairytale concept of a dwarf and some kind of part halfling, part gnome creature with a giant beak like nose who had an unhealthy fascination with gold, and just came off sort of greedy and creepy.
Despite the disservice that pop culture has done this species, they remain a popular choice in roleplaying games, due to their inherent stamina and natural aptitude for combat and exploration. Which leads me to my point, whenever I have the chance to draw dwarves, I try to reflect the better qualities of their race, and show them as more than some steroid riddled gnome with an axe, but a character of real courage and resolve, with a realistic and distinct anatomy that makes them a worthy addition to modern fantasy. 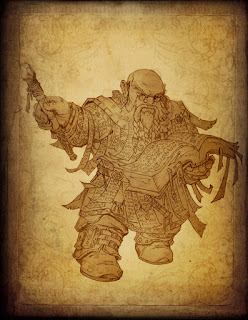