Another character design for Paizo, this one was unique in that it was a portrait of an actual pathfinder, and a central, unifying character used in the Pathfinder fiction mythos. The team at Paizo wanted someone that could be used as a single voice that their audience could connect with, who could lend personality to the world, travelling from place to place and relating his journeys as he did so. His design was intended to be an archetype heroic figure, but with a roguish, survivalist slant, essentially a fantasy Han Solo.
He was used in a number of places, and eventually ended up on the cover of "The Compass Stone: The Collected Journals of Eando Kline", which was a collected novella of pathfinder short fiction.
The image was also used as the basis for the Pathfinder series miniature design of the same name. 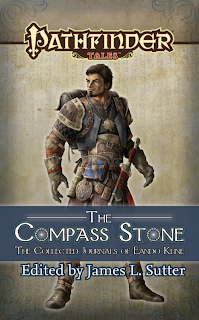 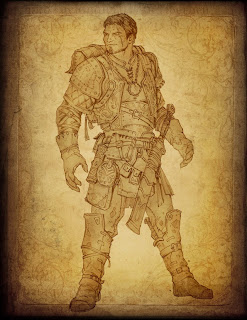