I've been a big Frazetta fan for years. After he passed, as some of you probably know already, I began doing Conan art as a tribute to Franks influence on my childhood, and career, for that matter.
Its been a little while since I've had a chance to do anything in that vein, but I had a good idea the other day, and really wanted to see it through before convention season starts, and steals every last second of spare time I have left. So that's exactly what I spent last weekend doing, and I am happy to say I managed to pull this one together in time.
No sketch for this one (at least, no sketch worth showing). 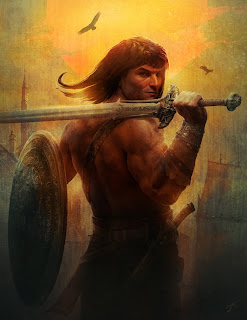