I've been working with Paizo a very long time. One of my first big commissions as a working freelancer was a cover for Dungeon Magazine , and soon after Dragon Magazine as well. This was followed by many, many articles, pages spreads, borders, title graphics and interior maps for both magazines. Paizo was great to work with on those first projects, and they have been one of my most consistent clients ever since.
I've tried to contribute a good amount of art to the Pathfinder line since it began. They have always managed to maintain such a high standard of quality, that having my work included in their products is always an honor. But until recently, I had only done interior illustration work for Pathfinder, and never any covers. That all changed about four months ago, when they contacted me to do the Demon Hunters Handbook cover, an action scene featuring their iconic dwarf and a giant demon, a scene which hearkens back to the kind of art that used to grace the pages of old Dungeons & Dragons covers, and yes, even the pages of Dragon and Dungeon Magazines as well.
Here we have the submitted sketch, and the corresponding color rough produced prior to working on the final image. 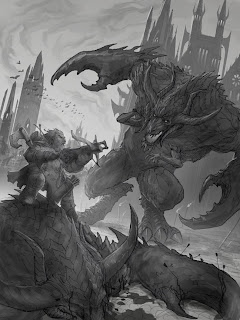 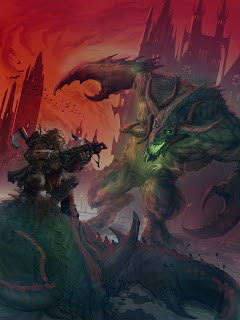 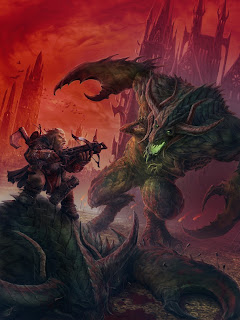 The book should be on shelves early August, and is available for pre-order here
Posted by Unknown at 2:36 PM