This was one of two images that came in a little late, after I had done most of the others. It was one of the latter additions, that I suspect was taking a few extra laps in the playtesting pool before the designer decided it was in fact ready for the spotlight. Its a pretty great idea for a class actually, it takes the combat centric play of tabletop role playing, and creates inside those boundaries, a true academic character. In the world that Pathfinder has become, a place full of ancient history and deep mysteries, this character is someone who specializes in lore and language, and its a particularly useful profession, but not one you are likely to see at every gaming table. 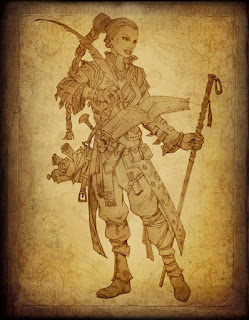