This was a fun one, a job done for a large, particularly demanding card game company that shall remain nameless.
The original description was that the monster needed to be a giant, fire based, apocalypse monster. The shape size and details were all open season. So I provided the sketches shown here, and they picked the first one, as I suspected they probably would. 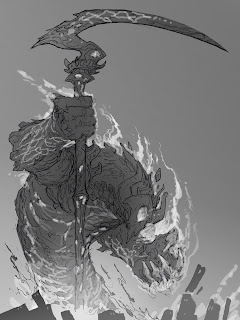 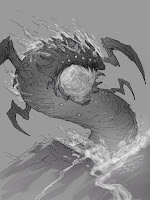 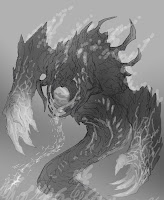 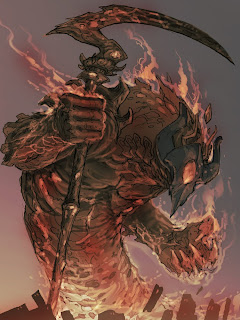 After the initial sketch approvals, I sent in progressive shots for incremental approval, something I don't usually do, but it has the added benefit of saving out piece by piece images for me to show how the image came together. This is the color sketch, using just basic shading and coloring to create a rough for the images overall concept. 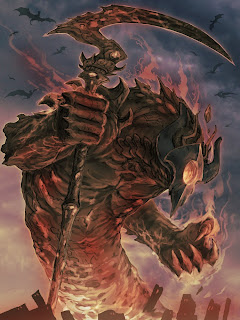 Here is the rough refined a bit more, with added coloring and texture to the background, to bring the figure out more, and with some rim lighting for a little dramatic contrast. I also reduced down the contrast of the fires along his back and neck area, so I could paint in the final fire over the top. 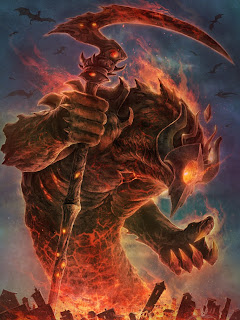 And here it is at final, with the background colors saturated even more for contrast (with fairly low color characters this is a trick that can add more color to the image without hurting the overall character concept or mood to much) And of course with the finished fire, molten cracks, glow effects, even more rim lighting, and just a whole lot of little refined detail work.
Posted by Unknown at 10:54 AM