After sketch approval, I began to render in the values in grayscale, both on the character and background, to get a sense of the shapes the lighting was going to create in the composition. 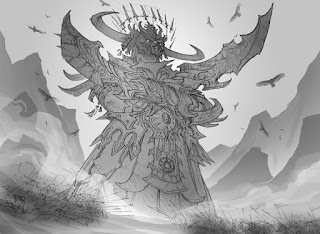 Then I started darkening the image down to a medium range of tone, and flattening some of the contrast with a low opacity airbrushing. I left just enough of the tones in place to pick out the general shadow areas, and used the airbrush to darken in some of those as well. 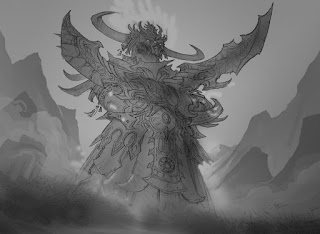 I began adding a very light general color base to the image, which would give me something to build on, and a general sense of where to take the scene coloring later on. I also began picking out some of the detail shadows and highlights. 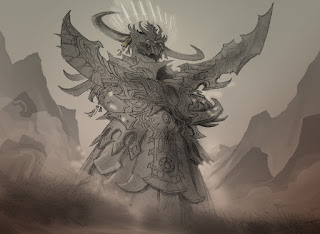 I added a little more color and some of the glowing areas. I gave him a kind of bruised purple color, because I knew he was a red creature in the game, so I would end up washing the image in lots of reds and oranges, so the purple would darken up nicely later on. I also wanted to make sure I got enough of the darks down early, so he would have a very shadowed, silhouette kind of look, and the glowing areas were immediately important as well, as they were going to stand out against the dark shadow areas the strongest. 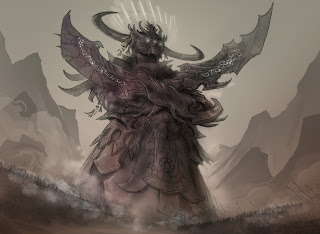 Here I began to add the edging on the shadows and pull out the highlight, putting in the depth that would define the various details on the armor plates, headpiece and weapons. I also blocked in the armies bellow the figure. I started adding a few details to the background as well, giving the mountains some rim lighting, and adding back the vultures from the initial sketch. 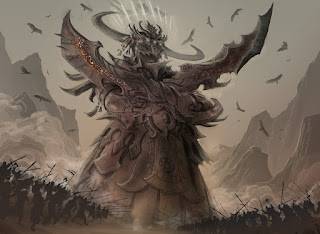 I rendered in even more of the background here, giving it texture and adding in mist and clouds for additional distance and interest. I also gave it a light wash of cyan, because I knew it would drop out behind the heavy reds and blacks I was going to be using on the main figure, and give additional depth. I also added in some of the coloring to the glowing areas, and continued to add definition to the shadows and highlights. I also began texturing the figure here. 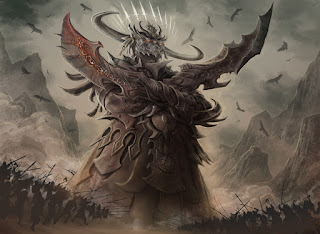 Here is where I really started to pull out the glowing areas, in the face and weapons, adding the full color effects. I was continuing to refine the little details of the armor and weapons here as well. I also painted in the armies in the foreground, which was an interesting balancing act. Usually when painting something into the foreground as a secondary element of interest, I will use fairly little detail so the eye just glides past it to the main figure, but here, detail was necessary to pick out all the small figures, so I had to resort to color use and tone. I kept the coloring bland and used the clouds of dust stirred up by the dual armies to keep them both as close in tone to the background as possible. This kept them from becoming the primary interest, and guaranteed that the eye would only see them once it began to travel over the background elements. 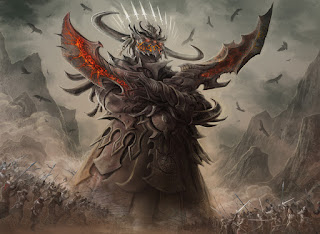 I began to really tighten everything up here, adding in even more textures and glow effects, putting in more reds and browns to the foreground and the main character. It was a tricky decision to add just enough red to the right areas, as I wanted to leave enough of the armor in the dark gray range to suggest the kind of ancient, dented, spiky, imposing, evil looking armor a war god would want to pull off the clearance rack. 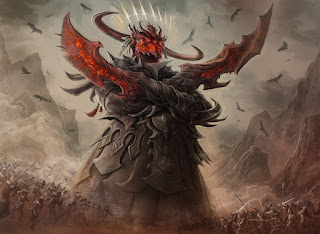 And here is the final, with a little more texture thrown on top for good measure, and a lot more orange added into the image as a whole, which I mainly added in after flattening the image down to a single layer. This helps pull out the existing reds, and saturates them even more, while pulling the rest of the image ever so slightly into the same warm range, which help pull the details together, and helps them "sit" in the same image more believably. 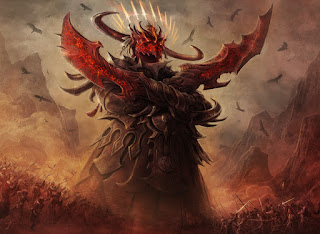