This image had a wonderful description for me to work from. It was simply that it needed to be an enormous creature, and a cross between a centipede and a sandworm, but the art director made sure to mention that I could take it in a different direction if I was inspired, and that it simply needed to be as big as possible, scary, and breaking through a giant wall. The "codename" given to the creature during development was "Godzilla", which I thought was great. I spent several days designing different kinds of bodies and heads, some with alien limbs and spikes, some closer to a giant mutated serpent, and some that were more insect then wyrm. But in the end I picked the pieces that worked best, and combined everything together into the image as it looks in the submitted sketch. 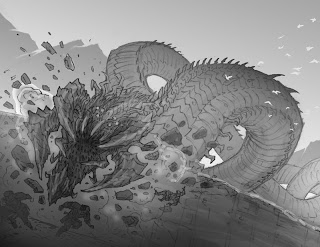 Here it is after I cut out the main figure and the wall, and started with the basic shading of the overall scene, the serpent body, and was actually pretty far along with the detail work for the head. I knew it was going to be the trickiest part of the image, so I went in and tackled it first. 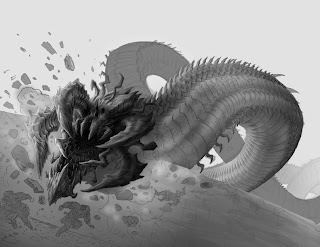 This is where I pulled back the contrast of the wall and darkened it down a bit. I needed it to show depth behind the monsters head, and still have smoke and debris blowing around it at the same time, So I played with the tone until it gave me what I needed. I had also begun to color the monster as well. 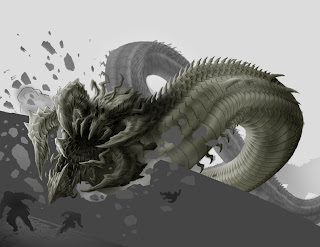 Here I've added back the shading to the wall, and created crack details and further defined the flying rocks. I also added in the final colors for the creatures eyes and mouth, and added the birds in the background for additional size reference and interest in that side of the image. I initially wanted to put mountains in the background, and planned to as seen in the approved sketch, but realized half way through that it kind of ruined the upward angle shot, and almost made the creature seem smaller, so I took them out and replaced them with birds. 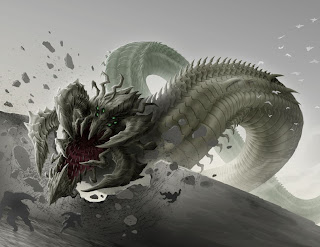 Here I've refined a bit more of the lighting, worked in the body details, the wall texture, and nearly finalized the overall scene color concept. 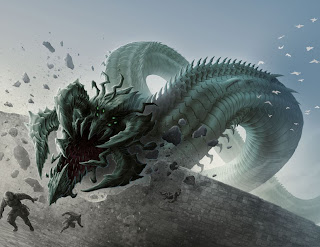 Here I've added some light coloring to the sky to help contrast the creature from the background, and added in even more texture, including an overall scene texture overlay to add more action and visual noise to the image. 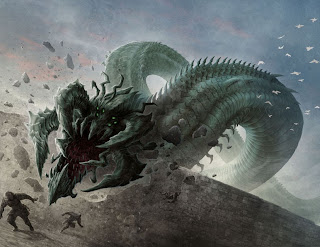 Here I've flattened it down, and darkened it a bit, and really played around with the colors, glows, depth of field, and contrast. Sometimes with an image like this, a monochromatic palette can lend realism, but then adding just enough color to give it impact can be a fine line, so I usually wait until the latter stages of an image to really play with the color theory. 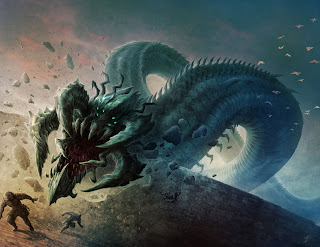