Some of you may be doing the match and realizing its been about a month since Illuxcon. Why the stunningly overdue report you may ask? Well, I've been busy. And out of town. And also busy with the art I should have been doing while out of town. And then out of town again...you get the idea.

"Better late then never!" is what people usually say, but art directors hate that kind of statement, so I'm going with "I was so overwhelmed by the experience that I couldn't put metaphorical pen to paper until I unknotted my brain from the rubicon-like pasta it had been scrambled into by the pure awesomeness of Illuxcon." Which is actually pretty accurate anyway.

This was a strange convention for me, as I had nowhere particular to be. No booth, no volunteer badge, no panels, nothing...just a ticket to get in the door and a desire to see and experience a great deluge of talent, undiluted by other kinds of booths the way most conventions are. Don't get me wrong, I love games, comics, publishers, and movie companies, but sometimes conventions are so full of all those things that the humble artists get lost in the crowd.

Seeing them all in one place is a great, almost zen-like experience for the fantasy art fan. And no one in the business is just an artist, we are all fans of the medium first, and artist second. Maybe that order changes over time for some of us, but it simply isn't a genre you can paint without holding it close to your heart for years beforehand, and learning its complexities and nuance. It's a genre of both pure imagination and historical reference, and has just as many tropes and clichés as it does original ideas never before seen or painted, and knowing how to traverse that landscape of the unreal correctly, is the difference between a practiced hand and a rank amateur, regardless of talent. Though talent helps.

As I walked off the plane (I use the word "plane" rather loosely here, it was more like a miniature version of the planes I had flown on previously) I found that, not surprisingly, Altoona, PA ha a rather tiny airport. It isn't the tiniest I've ever seen, but very nearly. And it also sports a distinct odor of fertilizer, which I took at first to be some sort of nearby septic malfunction, but later realized it was simply a matter of the airports location out of town, and surrounded by farm land.

I then arrived at the Ramada, the hotel which has been both the secondary location for the conventions official events, and the watering hole for artists and attendees after the show has closed down for the day. The bar was mostly empty, as it was still afternoon and most of the show was still setting up at the convention hall downtown, so I went to the restaurant across the street for some tasty and terribly unhealthy mexican food, combined with a "medium" margarita (note: whenever a mexican restaurant has varying sizes for alcoholic drinks, two truths become self evident, that they will be very, very large, and not great. But I have always found that the first rule discounts the second!)
After I finished dinner, I went back to the room for a while, and later returned to the hotel bar, to find it populated by a few familiar faces. William O'connor had just arrived, Ralph Horsley, and a number of other artists who I instantly recognized from the convention circuit. I then proceeded to have a ton of great conversations over the next several hours that I can remember very little about.

The next day I attended the show itself, and was able to take some photos from the convention hall: 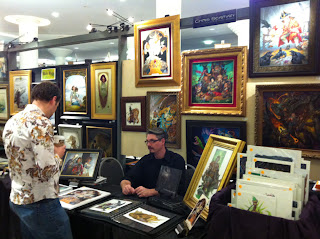 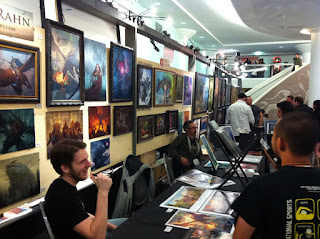 Chris Rahn has some incredible work. It will melt your face. You will find yourself wanting to cry from how awesome the work is, and then you will realize your tear ducts have melted down onto your chin, which is also kind of sad. Steve Prescott is in the background, also melting faces, but with his awesome facial hair arrangement. 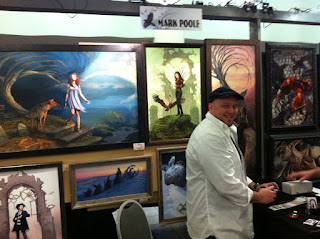 Mark Poole is incredibly photogenic. Let me explain: This is an ambush photo, and he still managed to turn and smile in exactly 1/100ths of a second. Its unnerving. Had I been a snake, he would have bit ME. 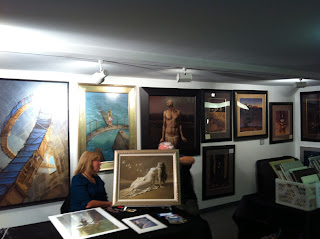 the booths of Michael Whelan and John Palencar right next door to one another (which is pretty crazy in and of itself). Note neither artist is in attendance, as is a common sight at Illuxcon. Most of the big names like to roam the floor, and stop in at their table to do the meet 'n greet thing when they get tired of standing. Let me be clear: this is an awesome thing. It is both the antithesis of most conventions for artists, and also means you can have a real conversation (instead of a "behind a booth convention style conversation) with any legend of the business that you can spot in the hall. 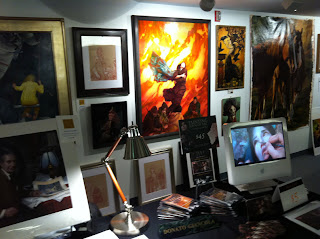 Donato's booth. I think it needs more stuff, but other then that its pretty cool (hah!). He actually had a lot of space to display, both his originals and a sketches portfolio, and let me tell you, if you thought his originals were big, his sketches are just as huge. This is not a common thing, most of us draw small and paint big. But I guess taking that extra time is working out for him so far, so I think it's safe to say he knows quite a few things the rest of us are missing. 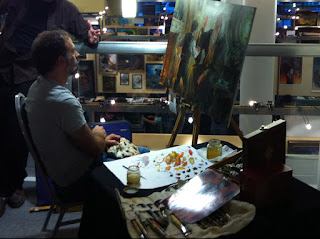 Here is Donato at work, touching up his latest LoTR piece. Unbelievable subtlety and detail goes into his work. Also, though I didn't get a picture due to people standing in the way, about ten feet behind Donato was Boris Vallejo, also working on a painting. Only at Illuxcon does that occur, and in a space where people can watch!
The following few days and nights turn into a bit of a blur, attending the main convention building and alternating between the main hall, where the art and artists are setup, and the auditorium and classrooms next door, where the panels and movie screenings take place. I saw some great panels on freelancing, art directors, branding, and the industry as a whole. Really great, inspiring, informative stuff.
And as you have probably guessed, the evenings mostly took place at the Ramada bar, and consisted of great revelry and consumption of alcohol.

Friday night was the "showcase" where 50 artists not displaying their work in the main hall, were invited to come display in one of the hotel ballrooms, for 4 hours, one night only. It was very cool, and opens up the show to a newer generation of artists, since the main show is so hard to get into, this is a great way to get your work seen by all the big names, and more then a few art directors as well.

Saturday night was the Illy awards, where Omar Rayyan took home the big award of the year. It's a different trophy every year, and this year was a grotesque, sculpted mutant zombie like head. So, it should look pretty cool in his living room ;)

And finally, the last night consisted of a very long meal at the nearby Outback restaurant, and then drinking with the likes of Larry Elmore (who kindly gave us a preview of his kickstarter art book, which is still ongoing at: http://www.kickstarter.com/projects/1488741362/larry-elmore-art-the-complete-elmore-artbook?ref=category) and Todd Lockwood, for a number of hours before closing down the bar and bidding them a fond farewell.

Convention season may be over for this year, but hey, 2012 itself is also almost over, and it was a fun one, so I can't wait for another big season next year!
Posted by Unknown at 10:17 AM