I really liked the idea behind this character. It's a classic multi-class concept, combining both the divine traits of the cleric and the outright damage output of the Mage into a single character. It's also a concept that is almost never seen in gaming, usually impossible to balance, and something designers tend to stay away from. But the basic idea is just fun, and a natural place for people to want to take a high level character, so the rules technicians found a way to put it into the book. And I'm glad they did, because I have never had a chance to draw another Mage/Cleric before or since. 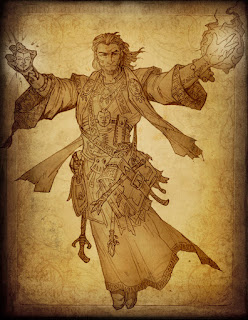