The Fall of the Gray Veil

This was a piece for Dungeon Magazine done late last year, and I am reasonably sure it was published in February in the E-zine.
It was a bit unusual, obviously for the subject matter, as fantasy art rarely affords the chance to render someone of a less then super heroic physique, much less one of somewhat morbid proportions.
But it was also unusal due to the nature of the article it was illustrating. The storyline of the adventure involved a certain odd magical effect, in that the area in which it took place, was enshrouded in some kind of curse that took the color out of everything. Yes, it sounds basically like an episode of the twilight zone, or a certain tobey maguire movie from 1998.
Regardless of the inspiration, the art for the article was commissioned with the odd request of being full color, but needing also to look perfectly as good in black and white. Simple right? No real adjustment necessary right? Good art looks good in color or not, no matter what, right? I seem to be using a lot of presumptive question marks as though I'm going to lead up to a point that completely discards all the previous statements right? You guessed it!
Simply put, full color art can look just fine in grayscale. It just doesnt always. And its a hell of a thing to finish a painting in full color, and turn it black and white only to realize all the vivid color clothing and armor, is all in the same tonal range, so instead of a well realized image, you now have a muddy gray mess.
So, as a little insurance policy, I painted the image in a range of very low color saturation, so the tones were very easy to keep track of in relation to color. Which, to be honest, the image lends itself to rather easily, since the subject matter is basically a giant walking truckload of dead flesh, and a vampire. These are not colorful things at the best of times, so it was an easy balancing act in the end. 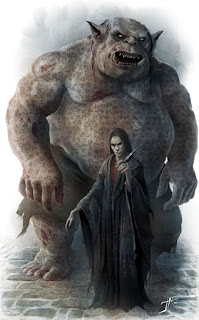