This was one of the characters I was assigned for the NPC Codex, a Pathfinder roleplaying game book. The book itself was a pretty mammoth undertaking (for Paizo anyway, not me, I only had to do 6 characters for it), and the huge number of characters included is impressive, but the quality of the art in the book is even more outstanding. Not every image is perfect mind you, but overall, it sets a high standard for a book with hundreds of full body character images. It's like a bestiary for NPC's, and not somthing I've seen on this scale before.

Also, it was a cool project to be a part of, because the characters were all unique, interesting, and unusual. So often fantasy art is a matter of creating a variation on a well worn archetype, and these characters are definitely not archetypes. I will be posting my work for this book over the oming days here, and first off is the orc shadow dancer bard assassin. I'm not sure what the official classes ended up in the final product by the way, I'm just listing the character backgrounds as they were given to me, so you can identify why I drew them as I did. They may have changed throughout production to something else entirely, this orc may be published as, say, a duel knife wielding janitor in the final printed book. 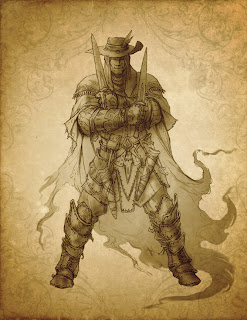 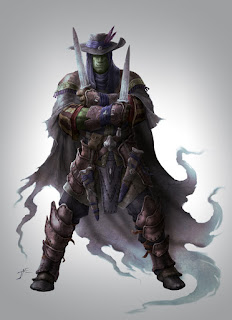