This is another one from the NPC Codex. The only girl in the bunch, she is an Elf Sorceress.
She is probably the most arch typical of the characters I did for the book, which is why I wanted to show her as a bit more rugged and less whimsical. For example, I even gave her pants and a sword! but in the end, I couldn't resist the urge to give her a cartoonishly large bust. I guess I can only do so much before my years of training in traditionalist fantasy art take over.
Also, the color use on this one was a bigger challenge then usual. As with all my Paizo character work, I try to use Wayne Reynolds Iconic characters as a kind of springboard for style, and visual brand, as there are few games in the genre so defined by one artists specific look as Pathfinder. But in this case, one of the basic iconics done by Wayne is a female sorceress, so I wanted to make this one as distinct as possible, but still include some subtle cues to make her similar. Which sounds completely contradictory right? well, therein lies the challenge. So I made her a lot more rugged where Wayne's character was more womanly (AKA, less clothing) and I gave her blues and greens, where the iconic sorceress is dressed in an orange-red color. 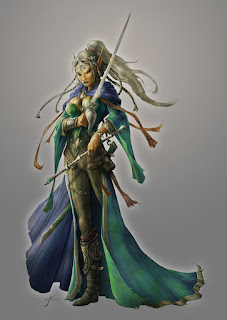 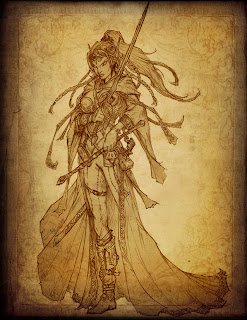