This is the second of my Shaintar character archetypes series, and features the fighter. He's a little world weary, which is reinforcing the more realistic angle I was trying for with this project. After all, after years of roaming around the world as a mercenary, killing and marching, marching and killing, life is a brutal place for a professional soldier. I also gave him a rather mixed assortment of gear and clothing, to show that he has travelled far and mixed and matched available armor. 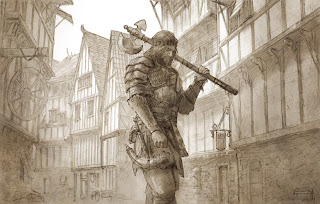